Psalm 89 - I have found my servant David 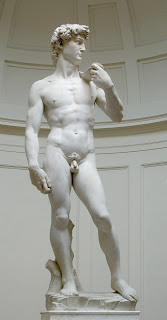 What a man he must have been! I imagine him as a hybrid of Brad Pitt, Bill Clinton, and Hulk Hogan. As a shepherd boy, he did not charm his brothers (echoes of Joseph), but once anointed, he slayed the giant, soothed the king, befriended the prince, and inspired men to follow him into battle. David, the King, stands tall in the history of Israel.

It is commonplace for subjects and vassals to laud their rulers (see modern examples 1 and 2). Whenever these words were originally used (in support of David's and his heirs' dynasty?), they have been taken up by generation after generation, long after David's kingdom had been split, then conquered, and his throne destroyed.

At a minimum, they need faithful re-purposing.

Before we replace David's dynasty with one of our own imagination, though, let us contemplate David as an icon for his people. The psalm claims, even takes for granted, that God gives an extra measure of favor, that God anoints some, and of necessity, does not anoint others. And the prayers of Israel, in David's time and beyond, believed in God's devotion, if not always to David himself, but to God's own promise. And that promise is to David, and it is more expansive than to David himself. It is an outgrowth of, of addition to, God's covenant to Abraham, and Isaac, and Jacob, and to the people, the whole raggedy group of Israel's progeny.

Whatever his faults, David was anointed. He gathered the people and preserved them in a hostile environment. God chose him, and the voices of faith continue to affirm the choice, not because David was perfect. God's faithfulness has continued to bring forth good from this choice.

"His line shall continue forever, and his throne endure before me like the sun." To be true before God, we need to understand "his line" and "his throne," since his earthly throne is long gone.

As a matter of faith, you can see David's line and his throne where you will. Translating it only to the heavens, though, is unsatisfactory.

"I will not remove from him my steadfast love," the psalmist says for God. If this is true of David, despite the facts not adding up, is it true of us? Are we somehow in David's line, by faith if not be blood?

Ultimately, this is about faith. Our trust that we are included in God's promises of liberation and redemption. And our trust in the Biblical bedrock: God's covenant faithfulness, God's steadfast love, God's word which has gone forth and is still redeeming the world.