Psalm 45 - I address my verses to the king 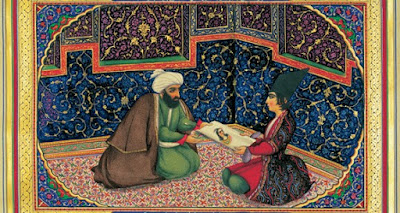 The psalm is over the top. Read all the verses. It is Song of Songs territory.

You can readily see it as rooted in the Ancient Near East culture, particularly that of princely houses and courts. And what ruler, whether of nation or home, is not in some manner pleased by extravagent praise?

The psalm does come with an editorial superscript: "To the leader: according to Lilies. Of the Korahites. A Maskil. A love song." and many modern translations title it as an "Ode for a Royal Wedding." 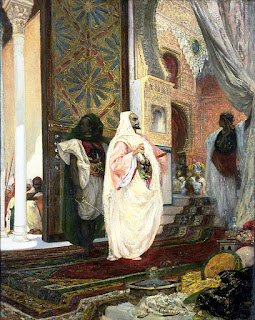 It is not simply a modern misreading to see sexual double entendre in these lines. "Gird your sword on your thigh, O mighty one" (verse 3) is soon followed by talk of the daughters of kings in this king's court. An ivory palace, fragrant and luxurious robes. The king is a handsome man with sweet lips. Anointing with the oil of gladness. A princess decked in gold-woven robes, led to the king and attended by virgins (or young girls, the Hebrew can mean either).

When the West looks to the East, we bring along caravans of cultural and colonial baggage. So take with a grain of salt all those Victorian-era oil paintings of harems painted for Wealthy English Gentlemen. but recall instead that archaic term, potentate, used to describe rulers like the king of this psalm.

The psalm goes all in on potent. The ruler is potent in war, potent in wealth, potent in sexual capacity, and potent in offspring: "You, o king, shall have sons; you will make them princes in all the earth" (verse 16). We hope for a king, representing and leading the nation, to be vigorous, especially if their personal vigor is a symbol of the communal ability, and is linked to the Biblical virtues of righteousness and justice, "a scepter of equity" (verse 6).

The psalm has, of course, come to be transferred to contexts beyond that of a royal wedding. Most of us will not get invitations to the palace for that event, even if we can watch on TV or gather along the parade route.

What does it mean to treat this psalm not as a song to flatter the current prince, but a prayer to the Lord of hosts? Do our hearts overflow with the same goodly excitement when we attend to the Lord, rather than the fleeting power of today's celebrity? Whose name is celebrated in all generations?