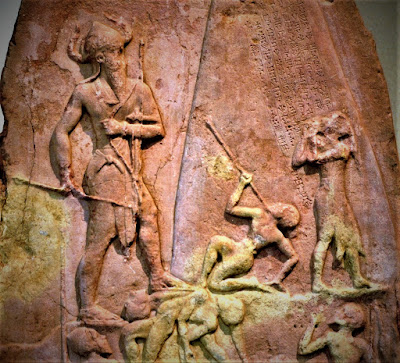 Jump to end of psalm
To the leader. Of the Korahites. A Psalm.
1) Clap your hands, all you peoples;
shout to God with loud songs of joy.
2) For the Lord, the Most High, is awesome,
a great king over all the earth.
3) He subdued peoples under us,
and nations under our feet.
4) He chose our heritage for us,
the pride of Jacob whom he loves. Selah
5) God has gone up with a shout,
the Lord with the sound of a trumpet.
6) Sing praises to God, sing praises;
sing praises to our King, sing praises.
7) For God is the king of all the earth;
sing praises with a psalm.

8) God is king over the nations;
God sits on his holy throne.
9) The princes of the peoples gather
as the people of the God of Abraham.
For the shields of the earth belong to God;
he is highly exalted.
Psalm 47 (NRSV*)
Ascension of the Lord

In some churches, when the congregation seems to need some activation, the worship leader may ask for a "hand praise" - in other words, "Clap your hands, all you peoples!". I won't try to negotiate the issues of applause in worship - except to note that here, the hand-clapping is directed only at God, and God's awesome-ness. Bring your whole heart, your whole body, your whole spirit in praise to the Lord.

Judaism and Christianity share some common ideas, images, and vocabulary to visualize God's role. Shepherd. Father. And probably above all, Lord (meaning Master), and King.

The Hebrew Bible knows in its DNA that human kings are problematic. Abraham's lineage negotiated through the territories local kings of varied quality. Throughout its history, Israel was beset by kings and their empires. The experience with the Pharaohs of Egypt birthed a deep distrust of kings and kingdoms. After the period of the judges, God, somewhat reluctantly it seems, accommodated the people's desire for their own kings. But we should be careful what we wish for. Even Israel's best kings look all too fallible in the text.

The same problems run throughout the New Testament world and texts. Caesar, with Herod as his henchman, is a pretty good summary of all that is anti-Christ. The image pictured here here shows the "Victory Stele of Naram-Sin," celebrating victory against the Lullubi from Zagros (in modern Syria) 2260 BC. He is wearing a horned helmet, a symbol of divinity, and is also portrayed in a larger scale in comparison to others to emphasize his superiority. And in this picture you see several of the problems with kings.
Now, the King of this psalm is certainly out-sized. He is the Lord God, above heaven and earth, "the Most High." This is the one king worthy of such adulation. Within the tradition of Israel, The Lord God has cosmic powers beyond the reach of any earthly king. God's victories may be like those of human kings, and also deploy the forces of earth and heaven. But the Lord of the Universe is also the kind of righteous, justice-loving, all-wise, and merciful king any nation might want.

In the Christian context, Psalm 47 is read on the Feast of the Ascension, principally because of verse 5: "God has gone up." All the other exalting of the One who rules over time and space and all creation is also part of the celebration of this God, who is on high.

Christian tradition also knows that the Lord not only reigns on high, but also deigns to come low. The Lord's divinity was not a reason for separation from creation, but for participation. Emmanuel, God with us.

We laud and serve earthly kings because of their might. We worship the Lord God because God's power is inseparable from God's love. Prayer and praise intermingle in celebration of the Lord's goodness to us and all creation.

Clap your hands, all you peoples; shout to God with loud songs of joy!

Credits:
Anonymous, Victory Stele of Naram-Sin, circa 2260 BCE. Public domain (CC BY 1.0).
* New Revised Standard Version Bible (NRSV), copyright © 1989 the Division of Christian Education of the National Council of the Churches of Christ in the United States of America. Used by permission. All rights reserved.