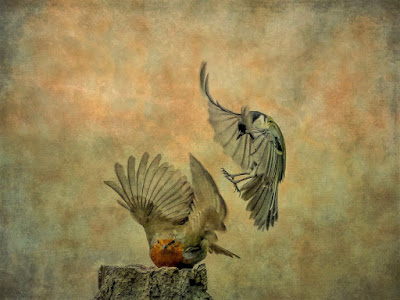 Jump to end of psalm
To the leader. Of David. A Psalm
1) Do not be silent, O God of my praise.
2) For wicked and deceitful mouths are opened against me,
speaking against me with lying tongues.
3) They beset me with words of hate,
and attack me without cause.
4) In return for my love they accuse me,
even while I make prayer for them.
5) So they reward me evil for good,
and hatred for my love.

6) They say, "Appoint a wicked man against him;
let an accuser stand on his right.
7) When he is tried, let him be found guilty;
let his prayer be counted as sin.
8) May his days be few;
may another seize his position.
9) May his children be orphans,
and his wife a widow.
10) May his children wander about and beg;
may they be driven out of the ruins they inhabit.
11) May the creditor seize all that he has;
may strangers plunder the fruits of his toil.
12) May there be no one to do him a kindness,
nor anyone to pity his orphaned children.
13) May his posterity be cut off;
may his name be blotted out in the second generation.
14) May the iniquity of his father be remembered before the Lord,
and do not let the sin of his mother be blotted out.
15) Let them be before the Lord continually,
and may his memory be cut off from the earth.
16) For he did not remember to show kindness,
but pursued the poor and needy
and the brokenhearted to their death.
17) He loved to curse; let curses come on him.
He did not like blessing; may it be far from him.
18) He clothed himself with cursing as his coat,
may it soak into his body like water,
like oil into his bones.
19) May it be like a garment that he wraps around himself,
like a belt that he wears every day."

20) May that be the reward of my accusers from the Lord,
of those who speak evil against my life.
21) But you, O Lord my Lord,
act on my behalf for your name’s sake;
because your steadfast love is good, deliver me.
22) For I am poor and needy,
and my heart is pierced within me.
23) I am gone like a shadow at evening;
I am shaken off like a locust.
24) My knees are weak through fasting;
my body has become gaunt.
25) I am an object of scorn to my accusers;
when they see me, they shake their heads.

26) Help me, O Lord my God!
Save me according to your steadfast love.
27) Let them know that this is your hand;
you, O Lord, have done it.
28) Let them curse, but you will bless.
Let my assailants be put to shame; may your servant be glad.
29) May my accusers be clothed with dishonor;
may they be wrapped in their own shame as in a mantle.
30) With my mouth I will give great thanks to the Lord;
I will praise him in the midst of the throng.
31) For he stands at the right hand of the needy,
to save them from those who would condemn them to death.

Psalm 109 (NRSV*)
Not included in the Revised Common Lectionary.

One of the frequent problems of the psalms is that of the slanderer, the one who speaks evil against the one praying, who points the finger of accusation. The one accused feels betrayed, by those whom he or she has loved, and on whose behalf offers prayers.

Today's prayer is not one of love, but of hurt. The psalmist, having been hurt and threatened, takes 14 verses to imagine their adversary's prayer. And it is harsh.

He did not like blessing; may it be far from him.
He wore his curses like clothes, may those curses soak into his body.
Send the wicked after him! Surround him with accusers!

Yet these words are in the voice of the one saying or praying the psalm. When we say them, they are our words, in our voice.

May his children be orphans, may they wander about and beg,
may they be driven even from the ruins they inhabit. May no one
show them pity, may they die childless. May his memory be cut off
from the earth.

It is no great leap to understand this prayer as projection, a prayer directed at my enemy. Whatever he said, let it happen to him! Verse 20 says as much: "May that be the reward of my accusers."

Of course the extreme nature of these verses is the likely reason they are not read in church for Sunday worship. They may not be a great model for our prayer - if for no other reason than that most of us do not have such fierce and bitter anger. At least not very often.

Most of us, most of the time, have no good reason for this strong desire for vengeance - or justice. Which one it is, is very much in the eye of the beholder.

But if you are feeling it, best you bring it to the Lord. Justified or not, put it out there. Let God work with it. Maybe your neighbors can do something with it too. Better your rage be with the Lord, than boiling within yourself or acted out. And if your anger is justified, then it is even more God's business.

For even this vicious prayer knows that, in contrast to the adversaries and sometimes to ourselves, God is a God of justice, whose curses are not casual, and whose blessing is profound. God always stands at the right hand of the needy.

And whatever else he or she knows, the one praying knows they are in need. "Do not be silent, O God of my praise." Hear me, speak to me, and answer my need.

Help me, O Lord my God!
Save me according to your steadfast love.

Credits:
Mark Freeth, Retribution. Used under (CC BY 2.0).
* New Revised Standard Version Bible (NRSV), copyright © 1989 the Division of Christian Education of the National Council of the Churches of Christ in the United States of America. Used by permission. All rights reserved.