Psalm 87 - The Lord loves the gates of Zion 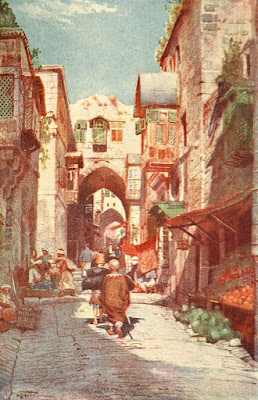 Jump to end of psalm
Of the Korahites. A Psalm. A Song.
1) On the holy mount stands the city he founded;
2) the Lord loves the gates of Zion
more than all the dwellings of Jacob.
3) Glorious things are spoken of you,
O city of God. Selah

4) Among those who know me I mention Rahab and Babylon;
Philistia too, and Tyre, with Ethiopia—
"This one was born there," they say.

5) And of Zion it shall be said,
"This one and that one were born in it";
for the Most High himself will establish it.
6) The Lord records, as he registers the peoples,
"This one was born there." Selah

7) Singers and dancers alike say,
"All my springs are in you."

Psalm 87
Not included in the Revised Common Lectionary.

Jerusalem, O Jerusalem. The city is justly fabled. People have invested heart and soul in it for millennia. Some talk about a particular quality of light and atmosphere unique to the place, and its complicated religious history is like that of no other city on earth.


So much history, so many feelings, and such passionate interests converge on this tiny piece of ground. Those who are rooted here, as individuals and communities, continue to love the gates of Zion, and claim them fiercely.

How much more so, the Lord, described as the City's founder. Tradition ascribes great significance to this place: God's deliverance of Isaac, the capital of David's kingdom, and the site of the Temple. (And later, the place of Jesus' passion and resurrection, and where Muhammad ascended into heaven and was given the second pillar of Islam, the guidance to pray five times a day.)

The Biblical ideology of Zion connects the Temple, the kingdom/nation, and the Lord, who is Zion's founder and speaks promises of eternal favor.

This psalm speaks of hope, pride, and confidence in Zion's brilliance. Like the other peoples and nations mentioned, Zion will be known as a place of pride.

There is always some line to be walked between pride and idolatry. We tend to desire glory, and to feel expansive and on top. Love of family or community or country can easily be twisted into disrespect to others, and paying the object of your pride, homage due only to a higher power.

This psalms does not let its love of Zion diminish anything else. It rejoices in what might seem "small potatoes," as nations go, a hill hidden among other hills, in a rough and weary land.

Yet it is beloved. It is beloved by those who walk its stony streets, whose real lives give the city meaning, writing its history with every visitor who passes through its gates, with every docket in the markets and child born.

This prayer loves its rocky ways, even proclaiming it as land of free-flowing springs, of fountains.

Love poetry should not be bound by by the stony desert reality. Jerusalem has always relied on imaginative leaps.

So claim this Jerusalem as yours, too. The city of old stones and golden light. The city whose name speaks peace. The New Jerusalem, still being built, which heals the nation's and welcomes all peoples through it beloved gates.

Love this Jerusalem, as we pray for the peace of the city.

Credits:
Regis Canevin, "A Street in Jerusalem. THE GATES OF ZION." his image was taken from Flickr's The Commons and labeled as in the public domain.
[1] "Jerusalem syndrome,"
* New Revised Standard Version Bible (NRSV), copyright © 1989 the Division of Christian Education of the National Council of the Churches of Christ in the United States of America. Used by permission. All rights reserved.