Psalm 132 - Remember all the hardships he endured

David occupies a place in Israel like no other. Beautiful, flawed, favored, he was not Israel's first king, but remembered as its best king. People looked back, and while they might have been impressed with Solomon's wealth and wisdom, it was David they lionized. David brought and held together the tribes that became the kingdom. David was remembered as a victor against impossible odds. He slew the giant, and his armies secured the nation's place in a dangerous region. David is credited with the Psalms that became Israel's songbook and prayerbook. And it was David who established Jerusalem as the capital, bringing the presence of the Lord to dwell there on Mount Zion.

Despite its remembrance of David, though, this is really a psalm about the Temple. The psalm recalls that it was David's vision to build the Temple (2 Samuel 7). And the Lord's love of David, and promises to him, are deployed to remind God of the David-centered promises.

Once the Temple was built, it became the center of Israel. It was the House of the Lord, the focal-place of worship, the royal treasury. Think of it as Capital Hill and Fort Knox and the Sistine Chapel all rolled into one. And more than this, it was thought of the actual dwelling place of the Most High God. God was believed to be present in the Temple in a way different from God's presence in the rest of the world. 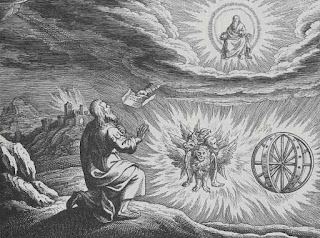 What would happen to the nation if God were to depart from Mount Zion, to flee Jerusalem?

This is not idle speculation. The first Temple, built by David's son Solomon, was destroyed 2600 years ago, by the invading armies of Nebuchadnezzar II, King of Babylon. The prophet Ezekiel, writing from exile in Babylon, sees the Glory of God fly away from the east gate of the house of the Lord (Ezekiel 10). [Note: please don't go crazy on the book of Ezekiel. At least as much as the rest of the Bible, you need to engage the world of Ezekiel to get what the words mean.]

We can appeal to our past history of hope and righteousness all we want. But God's promise to satisfy the poor with bread should call forth our faithfulness to God. The promise may have been given to David's line. But that lineage of kings failed the test of justice. Priests clothed with salvation and the faithful shouting for joy is in no way separate from the priests and peoples' willingness to share their bread.

In the Christian lectionary, this psalm is only read once every three years, on the Sunday celebrating Christ the King. The gospels put Jesus in the line of David - but especially in the line of those who preach the gospel of commensality - sharing the wealth to sustain community. When the psalm asks us to "remember all the hardships he endured," we might recall David, and we might also think on Jesus, and every other person who has endured in the face of adversity and injustice.

If we go to God's dwelling place, we will find a place where love, and hospitality, and food and sustenance are freely shared. God rests where the people live in shalom - peace, justice, wholeness.